On Saturday 29th January, pupils from Dunottar School, in Reigate, won the Championship Award at the First Lego League Regional tournament in London.

This inter-schools competition challenges teams to work together to explore a given topic; designing, building and programming an autonomous Lego robot to solve a series of missions.

Two teams representing Dunottar School competed at the event at Queen Mary University in London.  As well as the overall Championship Award, a Dunottar team won both the Project Award and the Robot Performance Award for scoring the highest points in the robot challenges. 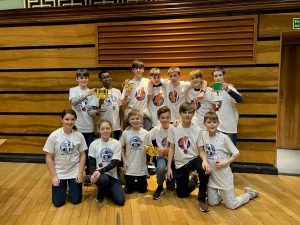 “It was fantastic to be back in London with two teams of pupils ready to take on the challenge!  It’s a brilliant day out and an incredible bonding experience that helps build critical STEM based problem solving and team building skills…I’m incredibly proud of how the teams performed.”   Sally Berry – Head of Computer Science

First Lego League is a global science and technology challenge for teams of students, aged 9-16 years. It aims to encourage an interest in real world issues and develop key skills that are crucial for their future careers.

Dunottar’s success in London will see the team compete at the National Final event in Harrogate this February.

This second-year win is testament to the inspirational computer science teaching at Dunottar, the success of the school’s Robotics Club and focus on ensuring pupils are gaining the digital skills that employers and government say are vital.