Year 7 and 8 pupils from Dunottar School in Reigate have enjoyed time off curriculum to take part in activities that were inspired by Shakespeare’s play ‘A Midsummer Night’s Dream’. 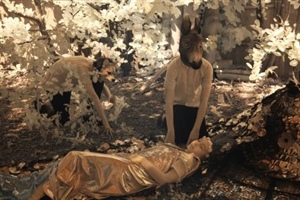 Aiming to develop pupils’ interests and talents beyond the classroom, Arts Week has also provided the opportunity to develop the pupils’ ‘warrior learner’ behaviours.

Since Joining United Learning in 2014, Dunottar has promoted the warrior learner behaviours of aspiration, curiosity, collaboration, inclusivity, creativity, independence and tenacity, which underpin the learning at the co-educational school.

The eager youngsters chose a workshop in which to to immerse themselves for the three days:

In a triumph of collaboration, Arts Week culminated with an abridged version of ‘A Midsummer Nights’ Dream’, performed in the newly created outdoor theatre. Fairies and lovers bounded around a stage with props made by pupils, in costumes designed and sewn by pupils, and accompanied by music composed and performed by pupils.

Deputy Head Pippa Smithson said: “A key part of this has been the creative journey the pupils have been on. Dealing with things going wrong, working under time pressure and collaborating with peers are part of that. The inspiring final production is testimony to this journey.”