On Thursday, 21st March, Year 9 students at Dunottar School in Reigate enjoyed a day off curriculum to take part in a range of activities, linked to World War 1. 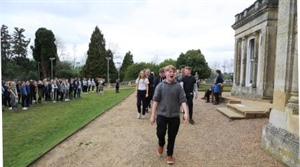 The aim of the day was to learn about aspects of the war that are not covered in the history curriculum.

Pupils took part in a wide range of activities, which included:

Head of History, Mrs Boden, commented: “We decided as a department that we would build on the success of last year’s cross-curricular day, and we were particularly interested in developing the school’s ‘warrior learner’ traits of curiosity, independence, creativity, aspiration, tenacity, inclusivity and collaboration. We were looking especially for collaboration and curiosity in the activities in which the students engaged.

“It is wonderful to have a teaching staff here at Dunottar who are willing to support initiatives like this,” she added. “Students really benefit from seeing that what they learn in the history classroom also has relevance in other subjects: history isn’t an isolated subject on the curriculum. From the students’ feedback, we definitely fulfilled our aims.

“We’re now looking forward to our visit to the trenches in Belgium next term to further enhance the students’ educational opportunities.”

The history department at Dunottar School is the first secondary school in Surrey and one of only a handful of secondary schools in the country to be awarded the gold Historical Association Quality Mark, which recognises the excellence of history provision in a school.