A team of pupils from Dunottar School in Reigate have won the Robot Performance Award at the First Lego League regional tournament in London. 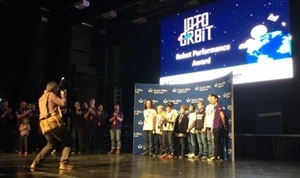 First Lego League is a global science and technology challenge for teams of students, aged 9-16 years. It aims to encourage an interest in real world issues and develop key skills that are crucial for their future careers. The students are challenged to work together to explore a given topic and to design, build and program an autonomous Lego robot to solve a series of missions.

On Saturday 26th January, two teams representing Dunottar School competed against twenty other teams at the Regional Tournament at Queen Mary University in London. One of the teams, Dunottar Dark Matter, won the Robot Performance Award for achieving the highest score in the robot rounds.

The seven pupils, aged 10-15, were awarded points for how successfully their robot achieved missions such as sliding Lego down a ramp. They also presented ideas to a panel of judges about how to solve problems that astronauts face in space.

Dunottar’s head of computer science, Sally Berry, said: “A huge amount of hard work and commitment from the students has gone into preparing for the competition. This is the second year we’ve entered the event, and I’m incredibly proud of them.”

Headmaster, Mark Tottman, added: “Artificial intelligence and machine learning are becoming increasingly prevalent in our lives. I am delighted that so many of our Dunottar pupils have embraced this robotics challenge. At one point in the competition, two pupils had to work rapidly to rewrite their code in response to an unexpected problem with a sensor, thereby showing the creativity and resilience under pressure that will serve them very well in the future.”