Dunottar School’s students are today celebrating their A Level results with 100% pass rate and some notable performances by individual pupils. In total, 47% of A Level entries achieved A*-B grades. 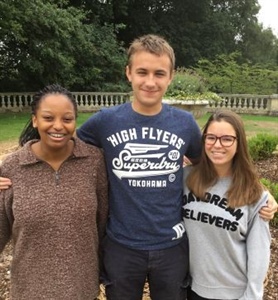 93% of students will be going to their first-choice university. Pupils will now go on to universities such to study for a broad range of academic degrees including Maritime Law, Aeronautical Engineering, and Arts and Humanities. Students have also been offered apprenticeships with consumer goods company Unilever and one of the world’s largest accounting and advisory organisations, Grant Thornton.

Dunottar’s thriving Sixth Form, which is growing year on year, will soon be housed in a brand new Sixth Form Centre. Construction has begun over the summer holidays on its new home which is due to open next Easter and will help meet the increasing demand for places at the school.

Over the past few years since the school joined United Learning and became co-educational, more and more local families have been drawn to its successful academic track record and reputation for providing a broader education.

Mark Tottman, Headmaster of Dunottar School, said:  “I am really pleased for our Sixth Formers who are celebrating today. What is particularly gratifying is the range of degree courses that our pupils are going on to study. As a Headmaster, there is no greater satisfaction than seeing a pupil who loves a particular subject find a degree course at a good university, which helps them to take their enthusiasm and interest even further into their adult lives.

“At Dunottar, we pride ourselves on giving each Sixth Form pupil the opportunity to shine not only in their academic studies, but also more widely. This focus on education with character proves time and time again to be what employers look for when they recruit.  As adults ourselves, it is what we look back on as being the inspiration for our own successes.

“With the construction work now underway for our new Sixth Form Centre, we are increasingly attracting pupils to join us from local schools to enjoy the combination of academic rigour, excellent pastoral support and broader curriculum that we pride ourselves on at Dunottar.”