On 10th November, pupils from a school in Reigate performed a Shakespeare play at the world’s largest youth drama festival. 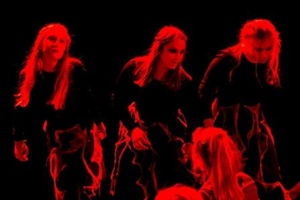 Students from Dunottar School performed an abridged version of ‘Macbeth’ at an exhilarating evening of Shakespeare productions at the Leatherhead Theatre in Leatherhead.

The performance was one of many across the UK, in which nearly 30,000 young people from primary, secondary and special schools united to stage autumn productions in professional theatres.

Director Tarani Jago, head of performing arts at Dunottar, said: “The cast rose to the challenge of performing ‘Macbeth’ magnificently by performing a dark, tense and creative version of Shakespeare’s tragedy. The students have a renewed excitement for the theatrical and storytelling possibilities for Shakespeare’s plays, and I am immensely proud of all of our performers. I look forward to taking part in the festival again next year!”

Headmaster, Mark Tottman, who attended the performance, commented: “It was a brilliant production—congratulations to all the cast, crew and Mrs Jago. You were superb!”