Students wear MUFTI to Raise over £200 for Sudanese School

Students at a school in Reigate have been wearing MUFTI to raise cash for a UK charity that has helped to build and develop a girls’ residential school in the Sudan. 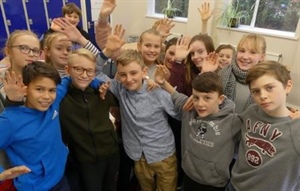 Pupils at Dunottar school in Reigate have ditched their uniforms and donned their weekend clothes, raising £2198.20 for Friends of Ibba Girls Schools in South Sudan.

Formed in 2011, the charity was established in response to a specific request from community leaders in Ibba County South Sudan, and the school opened for its first intake of forty girls in March 2014.

South Sudan is one of the worlds’ poorest countries. Devastated by decades of war, the country lacks a basic infrastructure. According to the charity’s website, 60-75% of the people are living on less than one US dollar a day, just 27% of the population have access to clean drinking water and 15% have access to safe sanitation.

Ibba Girls School aims to provide high quality education for girls aged ten to eighteen plus. It focuses on girls because most girls drop out of education at the age of ten. The school aims to educate and empower young women with the values, knowledge and skills for life and work, and for leadership in their local communities, and at all levels in this newest African nation.

Rowena Cole, Head teacher of Dunottar school, said: “This year, schools in United Learning are being encouraged to support Ibba Girls school. Its aim of empowering young women through education resonates with those of the Victorian founders of the first schools to form part of our group; at Dunottar, we were delighted to contribute to the fundraising efforts.”