The head of boys’ PE at Dunottar School in Reigate has teamed up with his physiotherapist brother to break a Guinness World Record. 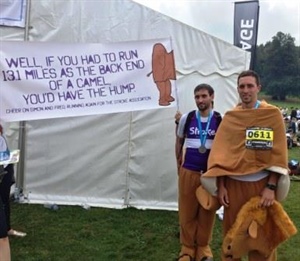 Simon Manning, 29, and his brother Fred, 26, took part in the Run Reigate half marathon on Sunday 18th September. Subject to ratification, they broke the world record for the fastest half marathon in a two-person pantomime outfit.

Dressed as a camel, they completed the half marathon in one hour, 48 minutes and 47 seconds, breaking the previous world record of two hours and three minutes.

Their record-breaking run on the single-lap course was to raise funds for The Stroke Association, the only UK-wide charity solely concerned with combating stroke in people of all ages.

Last July, they drummed up £2,000 in donations for the charity after a 131-mile run from Farnham to Dover over six consecutive days.  This weekend, they raised another £2,000, and this total is increasing by the day on their JustGiving web page: https://www.justgiving.com/fundraising/fredandsimon

The brothers were inspired to support The Stroke Association because their maternal grandmother had a stroke twelve years ago and passed away on Mother’s Day this year.

In a statement on their JustGiving page, the Mannings comment: “We fully appreciate very few people have levels of disposable money to continually donate to running freaks who tackle marathons; however, it would be great if you could spare whatever amount you are happy with to help make a difference to thousands who have suffered strokes, making rehabilitation to life as known before possible post-stroke.”

Many students and staff from Dunottar also took part in the half marathon with some impressive results. Conor was the sixth boy in the in the Run Reigate Kids’ Race. Dunottar also had four girls in the top twenty: Lottie was eleventh, Lauren was seventeenth, Charlotte was eighteenth and Jazmine was nineteenth.