The head of boys’ PE at a school in Reigate has teamed up with his physiotherapist brother to raise nearly £2,000 for charity. 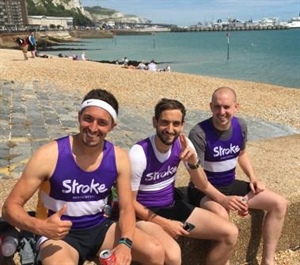 Simon Manning, 29, who works at Dunottar School, and his brother Fred, 26, ran the length of the North Downs Way over six consecutive days between July 11th -16th.

Their 131-mile run from Farnham to Dover was in aid of The Stroke Association, the only UK-wide charity solely concerned with combating stroke in people of all ages.

The brothers raised £1,907.44, and this total is rising by the day on their JustGiving web page: https://www.justgiving.com/fundraising/fredandsimon

The sporting pair averaged 22 miles a day and, on one particularly good day, ran 28 miles, which is two miles longer than a marathon.

In a statement on their JustGiving page, Simon and Fred commented: “Our Grandma (Mum’s side) suffered a pretty big stroke 12 years ago, losing her speech, much of her mobility and her freedom to do many things by herself. She proved many wrong by surviving so long after the stroke, but she sadly passed away on Mother’s Day this year, hours after we had visited her in hospital. Fred and I are committed to completing this challenge in honour of Grandma and to the benefit of the Stoke Association.”

On the last day of the run, they were joined by their elder brother Charlie, 31.

In September, Simon and Fred plan to break a Guinness World Record for the fastest half marathon—dressed as a camel!