Just like the Queen and David Attenborough, Dunottar School has celebrated a significant birthday. 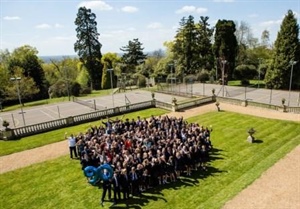 The Reigate-based school, which turned ninety on 4th May, has celebrated with a week of festivities. Dunottar deliberately delayed celebrations until after the summer exams and the return of the lower sixth to their lessons so that the entire community could enjoy a variety of events, which included a house birthday cake baking competition and a lunchtime party.

Tomorrow, LoveDunottar PTA will also be hosting a 90th birthday party at Denby’s Wine Estate, and the Dunottar Society (of alumni) will hold a reunion and 90th celebration at the weekend.

Founded in 1926, by Mrs Elliot-Pyle, the school was named after Dunnottar Castle in Scotland which she and her husband visited on honeymoon.  In 1651, the Honours, or Crown Jewels of Scotland, were taken to Dunnottar Castle for safe keeping, and the aspiring head mistress regarded the minds of children at her school as ‘precious jewels’ to be nurtured.

On 4th May 1926, Dunottar School began life in Brownlow Road with just three pupils. It proved popular and the growth in numbers prompted three moves before the High Trees Estate came onto the market and, in 1933, the Elliot-Pyles bought High Trees House and its twelve and a half acres for £5,000.

The Surrey Mirror discussed Dunottar’s move to its new premises in 1933:

“The final steps are being taken to complete the purchase of the well-known and delightfully situation property known as High Trees by the principals of Dunottar School, now at the top of Cronks Hill.  This represents a bold policy on the part of the principals, Mr T. D. Elliot-Pyle and Mrs Elliot-Pyle, M.A., and has been impelled by the growing needs of the school, which have emphasised the inadequacy of the present accommodation.

“High Trees will afford all the additional space required without sacrifice of position or accessibility. The mansion stands in lovely grounds of about twelve and a half acres in extent with beautiful terraced gardens and woodland. It occupies a lovely position, close to Redhill and Earlswood Commons, is situated on a Southern slope with an altitude of four hundred feet, and has the advantage of being away from main roads and commands a magnificent view unsurpassed in the Home Counties. It is a stately house, approached by a carriage drive, with entrance lodge and contains only two floors.”

Mrs Elliot-Pyle was determined that her pupils would reach their potential through hard work, self-discipline, good manners and consideration for others. She held very high standards for the pupils in her care, and these standards continue today.

The number of pupils on the roll shrank to about forty during the WW2.  Mrs Elliot-Pyle nearly closed the school but, whilst she was considering this action, a new pupil who had crossed the common during a bombing raid arrived. She decided that the child had gone through so much that she would keep the school open, despite the difficulties and small numbers for the rest of the war.

Like the whole of England, having enough food was a preoccupation and the land where the current sports hall sits was used to grow vegetables. As the school ‘dug for victory’, it was possible to hear bombs landing—Croydon in particular regularly came under fire.  The school’s wine cellar was used as an air raid shelter and, on bad days, lessons were even held down there.

On one occasion, a doodlebug, a V-1 flying bomb, dropped in the grounds. Wartime pupil Jean McPherson recorded in her diary: “SCHOOL 1944, with Doodlebugs. One landed, blowing out the windows (well wire-netted) above my desk—by that stage we were under the desks. It was the R.E. exam and we did it by fits and starts, as the V.I.s passed, and were given extra time.”

Head teacher, Rowena Cole, addressed pupils in a celebratory assembly. She commented: “Since starting at Dunottar, we have, without even really realising, stayed very close to the original founding principles of Mrs Ellliot-Pyle.  We expect you to be the very best that you can be, and we expect you to be this whilst upholding good manners and consideration to all others.  I hope that these values will shape your lives, as they have shaped the lives of the many individuals who have passed through the doors of Dunottar School during its ninety-year history.

“In the year that we celebrate Dunottar’s ninetieth birthday, I think that—despite the many recent changes to Dunottar and its rebirth as a coeducational school and a member of the United Learning family of schools—Mrs Elliot-Pyle would be proud that the heart of the school and the values it holds dear are as evident today as they were in 1926.”