A 16-year-old pupil from a school in Reigate has raised over £1000 for charity by having his hair shaved off. 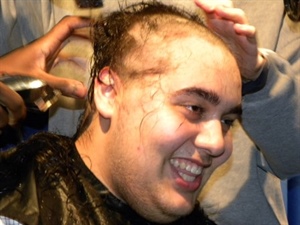 Arun, a pupil at Dunottar School, has raised more than £1,300 for Macmillan Cancer Support.

The sixth former was inspired to raise money for the charity when his best friend’s mother was diagnosed with breast cancer. This also brought back memories of his grandmother, who passed away four years ago from breast cancer.

Arun, who is studying for A’ levels in English Literature, Psychology, Philosophy and Ethics said: “I wanted to do something positive to help people and their families with cancer. An English teacher at my last school did ‘Brave the Shave’ and I thought, why not? I wanted to shock everyone in order to get as much publicity as possible for Macmillan.”

Arun’s friends Calvin, Harvey and Jake shaved his hair in front of a packed school hall of cheering students and staff on Friday 12th February.

Charlie Hammond, Deputy Head of sixth Form, commented: “I am so proud of Arun for braving the shave—it is inspiring to see such courage in front of the whole school. Macmillan is a charity close to his heart. Well done, Arun!”

Dunottar School has been instrumental in raising cash to support the new Macmillan Support Centre at East Surrey Hospital and will continue to do so. Arun recently accompanied Deputy Head Marc Broughton and a group of sixth formers to visit the newly-opened centre.