On Friday 5th February, some lucky students at a school in Reigate were given the chance to enjoy opera in their very own school. 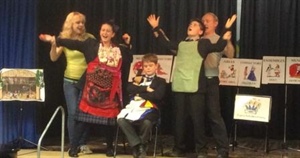 Dunottar School hosted a performance by the English Pocket Opera Company as part of an exciting national tour which has just been launched with United Learning – the group to which the school belongs.

Students at the school were treated to a performance of ‘Opera Blocks’, an engaging, interactive show designed to break down the building blocks of opera.  Students were introduced to the three basic ingredients of opera – action, words and music – and were taught the more technical side of the music, for example the use of libretto, arias and choruses.

Year 7 pupil Charlie commented: “They sang the script, and how they worked their voices to make them really low or high was cool!”

Emily Pettet, Director of Music at Dunottar, commented: “Many of our students have been introduced to opera for the very first time, and the English Pocket Opera Company involved everyone throughout the workshop. Some students volunteered to dress up and play the character roles from ‘Carmen’ on stage. At the end, having learnt about the building blocks of opera, Year 7 wrote an improvised opera, which the members of the workshop then performed on stage. Thank you to United Learning and the English Pocket Opera Company for allowing Dunottar School to take part in this exciting opportunity.“

Katie, in Year 7, said: “I like that they involved the whole audience and used students to make the opera. It was really funny!”