Polly is Young Sports Star of the Year!

We’re delighted to announce that a student from Dunottar School in Reigate has been awarded the title of Young Sports Star of the Year. 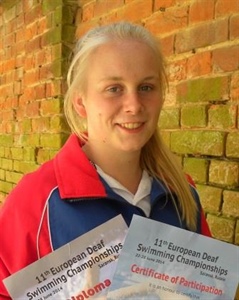 Polly received the Surrey and Sussex sports award last night for her achievements over the last twelve months in sport.

She made a splash when she swam for Team GB in the 11th European Deaf Swimming Championships in Saransk, Russia.

During the week-long event, she was awarded a certificate for coming fifth in the final of the 200 metres butterfly race, and she gained personal bests in the 100m backstroke, 100m breaststroke and 200m butterfly.

Amongst her many national achievements, the Dunottar student also won two silver medals at the National Disability Swimming Championships in Manchester and three bronze medals.

Proud mother Alison Saines said: “This is such fantastic news–we are so proud of her!”

Polly will be competing for Team GB at the World Deaf Swimming Championships in San Antonio, Texas, in America next August.

Next Meet the Head Session Tuesday 11th May 2021