A choir from a Reigate-based school was invited by Brockham Choral Society to perform at a concert last Saturday, 7th June. 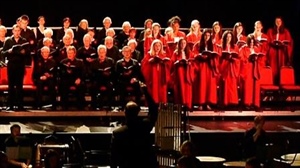 Dunottar Chamber Choir from Dunottar School received plenty of plaudits for their outstanding performance at the Dorking Halls.

Ed Criswick, Secretary of Brockham Choral Society, wrote to the school to “express the choir’s appreciation of the superb contribution the Dunottar Chamber Choir made” to the success of the concert.

He added, “The girls were called upon to perform two quite different works and had obviously been well rehearsed in both as they sang confidently and beautifully.  The Armed Man in particular was a difficult piece to sing and we were impressed by the girls’ technical competence and their ensemble singing.

“I have been gathering feedback from my choir and audience members in relation to the concert, and there were many plaudits from both for the performance of the Chamber Choir.

“Our conductor was under considerable pressure in pulling together the semi-staged performance of George and the Dragon and the very different demands of The Armed Man, and it was a great relief to him to be able to rely on the girls to come in at the right time and sing the right notes!”

Dunottar Chamber Choir’s conductor Charles Thompson commented: “They displayed musicianship of a high level. The choir’s clear, focused sound carried beautifully to the back of the hall, and made their passages particularly emotional and effective.”

“Almost needless to say, Brockham Choral Society would like to involve the Chamber Choir in another project as soon as possible!”