Sports students from Dunottar spent part of their Easter holidays in France, where they came second in an international netball competition. 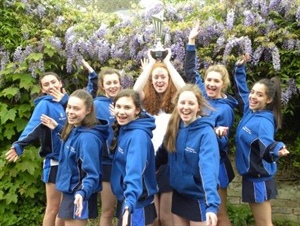 The Year 10 students took part in the U16 Challenger Shield Competition near Disneyland Paris. As well as playing in matches, their 3-day programme included four hours of gruelling netball challenges and coaching.

In total, they beat five teams – including one from Australia – to reach the final. The match was particularly thrilling as both Dunottar and the winning Burnt Mill Academy were unbeaten.

“The game was excellently fought by both sides,” said Head of P.E. Elaine Pieters, “with every last ounce of energy being used. Dunottar gained many comments from the umpires and coaches for their excellent sportsmanship and an impressive performance on court.

“It was a very proud moment to receive our trophy for second place in front of so many other teams, many of whom were a year older. The whole team played to an impressive standard throughout the tour and left us glowing with pride. It would be absolutely impossible to pick a player of the tour, so it goes to every single member of the team!”