Students from Dunottar appear on a single, which was chart-registered last week. 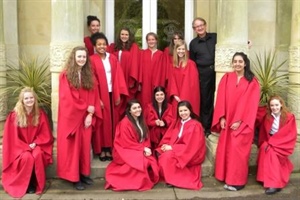 Dunottar School’s Chamber Choir sing the backing vocals to ‘Genesis’, the first track of a debut EP – ‘Testament’ –  which was released on the 20th April.

‘Genesis’ was written, mixed and produced by upcoming rap artist Jay Picasso, 27, who invited Dunottar Chamber Choir to his recording studio before Christmas.

Their singing teacher, Charles Thompson, commented: “It was a fascinating insight for the girls into how recordings are made – the soloist and other tracks were already recorded, and we had those playing in headphones whilst we sang.”

“The DJ said ‘Wow!’” commented Victoria Ikwuemesi, Religious Studies teacher at Dunottar.  “He said he would invite Jay to the radio station to quiz him about his music.”

‘Testament’ is available on Amazon and can also be downloaded on itunes.

Dunottar Chamber Choir, which also has extensive experience of traditional music, will be singing the semi-chorus parts in a newly commissioned work for Brockham Choral Society in June.