Spaghetti structures, pond dipping and colourful explosions all formed part of a three-day celebration of the sciences. 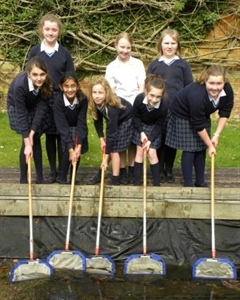 Students from Dunottar School in Reigate have celebrated National Science Week by holding a variety of science-themed events, all aiming to engage and enthuse the students with science, engineering and technology.

In biology, budding botanists examined the biodiversity of the school’s pond, which was last surveyed four years ago.

Biology teacher Jane O’ Dwyer commented: “We decided to follow an ‘exploring the future’ theme, preparing our students to be innovators and leaders of tomorrow.

“With the theme of the future in mind, part of our new future with United Learning will involve draining our pond and building a new one after Easter. For this reason, we decided to do a full pond survey and prepare to rehome anything we find there.”

Problem-solving skills were the order of the day for fledging physicists as students tested their knowledge of forces and centre of mass to build the highest, most stable and strongest structure out of spaghetti and marshmallows.

Meanwhile, chemistry went with a bang as Head of Chemistry Rea Pope demonstrated some of science’s loudest and most colourful experiments. Students enjoyed watching the explosive world of chemical reactions as different compounds were combined.

Mrs Pope said: “We’ve found that science week has engaged all of our students in the sciences and we’re looking forward to even more exciting science activities in the future.”