A fifteen-year-old Dunottar student has been recognised for breaking swimming records, picking up more medals along the way. 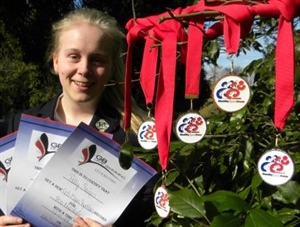 Alison Saines, Polly’s mother, commented: “Polly is training hard, working towards the European Deaf Swimming Championships to be held in Saransk, Russia, in June 2014. We are extremely proud of her.”

Next Meet the Head Session Tuesday 11th May 2021