Students from Dunottar have produced 108 Christmas boxes, which will be sent to children in the Ukraine. 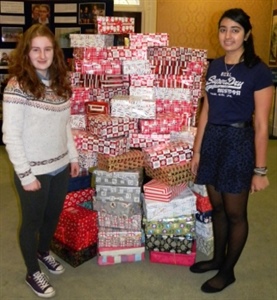 Following an assembly, students from Dunottar Reigate School for Girls were asked to prepare shoeboxes of Christmas gifts for children who live in poverty, have no parents, or receive no presents at Christmas.

This initiative is part of the Operation Christmas Child Appeal, run by the charity Samaritan’s Purse, which works worldwide to assist people in need.

Sixth formers Francesca Webb and her friend Tabitha Pearson (pictured), both 16, contributed an impressive sixty boxes to the appeal.

Francesca, who is doing A’ Levels in physics, chemistry, mathematics and further mathematics, commented: “Tabby and I were really moved by the video shown in assembly. My dad’s company, Chandler and Co., very kindly offered to sponsor us by donating money that they would have spent on Christmas cards.

“We prepared boxes for 10-14 year olds because that’s where there’s a shortage of donations. Tabby’s 13-year-old sister Enya helped up with the wrapping. It took six hours!”

Pupils at Dunottar Reigate wore their own clothes last month and raised £150 for the appeal. This money will help with the costs of transporting the boxes to Belarus.

Further details of Operation Christmas Child Appeal can be found on www.operationchristmaschild.org.uk.