Actor Warwick Davis has visited Dunottar School in Reigate—where his sister was a pupil. 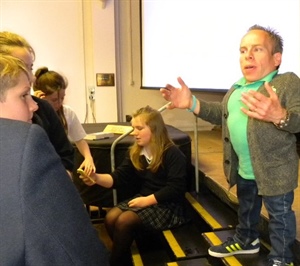 Commenting on his second visit in three months, he said: “The last time I was here, I was late, so I was in a bit of a fluster and I didn’t recognise it.  It wasn’t until later that day that my sister said, ‘that’s my old school!’”

The actor, TV presenter and film maker entertained his rapt audience with stories about his book Size Matters Not, his school days, acting career, and experiences of film making.

With a career spanning over three decades, Warwick is best known for his roles in Willow, Star Wars, Harry Potter films and on our TV screens in Life’s Too Short, Doctor Who and An Idiot Abroad 3.  As founder and director of The Reduced Height Theatre Company, he was featured on the BBC’s Modern Times.  He is currently on ITV’s Weekend Escapes series and is hosting Celebrity Squares.

Warwick thanked pupils for raising over £550 for his charity Little People UK, which aims to help people with dwarfism to build a positive future by offering them, and their families and friends, friendship and support.

Lucy, Lauren, Kate, Olivia, Tallulah and Katie had spearheaded the fundraising through a sponsored swim, and Dunottar has committed to long-term fundraising.

Warwick treated his audience to a clip of a rare film, which featured a story of his first acting part as Wicket the Ewok in the Star Wars film, Return of the Jedi.  The film also featured Harrison Ford, Mark Hamill and Carrie Fisher playing cameo roles.

Students and staff also learnt about the process of applying prosthetic makeup, which can take more than five hours.

Commenting on a recently-found box of prosthetic body parts from his various acting roles, Warwick joked with his bemused audience: “I do keep body parts in my garage!”

Deputy Head Teacher, Marc Broughton, said: “It was great to able to welcome Warwick back to the school for an extended visit.  He spoke wonderfully about all aspects of his life, from his first acting roles through to his work with Little People UK, and we all gained a great deal from his visit.”