Dunottar School in Reigate is celebrating a record number of enrolments for September 2015. Pupil numbers across the whole school will be up by 40%—and they are still rising. 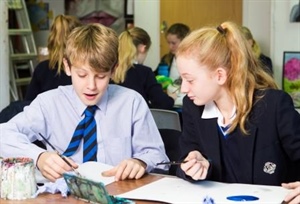 The current Year 8 will be bigger by an impressive 100% and, because demand for places is so great, the co-educational school is opening another Year 9 class in September.

Year 7 enrolments for September are up by a whopping 70%, and the school has the biggest number of new students since 1999.  Two classes are full and—with on-going enquiries—it is likely that there will be a third class.

Head teacher Rowena Cole said:  “It’s lovely to see the interest in Year 7.  Like our current Year 9, there’s a roughly equal split of 50:50 boys and girls, so we’re getting a really good co-educational mix.

“It’s also exciting to see that we’re gaining students from so many feeder schools—more than twenty schools at last count.”

New students have been enrolling at the independent school throughout the year, and prospective parents are ear-marking the school for September enrolments across all the year groups.

“These are exciting times,” added Rowena Cole.  “It’s a testament to all the hard work from a huge team of people, both within and beyond the school.

“It also indicates an incredible future ahead for Dunottar: everybody who fought so hard for the school was right to do so.”