Students Celebrate As and A*s with GCSEs

Students at Dunottar School in Reigate are celebrating some excellent GCSE results. Almost a third of the year group achieved eight or more top A and A* grades, and nearly half of all grades awarded were A and A*s. Music and modern foreign languages were just two of the departments celebrating 100% in exam modules. In total, 95% of the results were grade C or above. 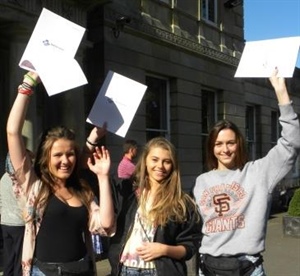 Isabelle Watson is one of five students to attain ten grade A and A*s. She intends to study A’ levels in English, Chemistry, Biology and Philosophy.

Her mother, lawyer Gina Watson, is herself a former pupil at Dunottar.  She said: “Issy worked so hard and I’m really thrilled for her. Dunottar has suited her so well.  Being at a smaller school with more individual attention has built her confidence and helped her to flourish in all areas.”

Head Teacher Nikki Matthews commented: “I’m delighted with the students’ results and they have done extremely well.  They have been supported by the guidance and commitment of their teachers who have dedicated themselves to bringing out the best in each and every pupil.

“We continue to provide students with opportunities to do GCSEs in non-curricular subjects. This year, a student achieved 100% in GCSE Arabic, and our first student to sit a GCSE in Chinese gained full marks in three out of the four modules.

“All of our GCSE students have shown the true Dunottar spirit to make a significant impact both within and outside the curriculum.

“They have won awards at Redhill and Reigate Music and Drama Festival and our critically acclaimed Dunottar Chamber Ensemble, a collaboration with local schools, was also honoured with an invitation to perform at a special festival concert. Our Chamber Choir also enjoyed the experience of recording backing vocals for a professional musician.

“In sport, the GCSE students have played both nationally and internationally. Our netball team won a shield in Paris and one of our swimmers represented Team GB in Russia.

“With half of our new Year 9 being boys, Dunottar is looking forward to a bright new future as a co-educational school, part of United Learning.

“We look forward to welcoming back girls who have been so successful today to our Sixth Form in September where they will be joined, in Lower Sixth by boys for the first time”.